Why You Should Keep Going with Your Blog 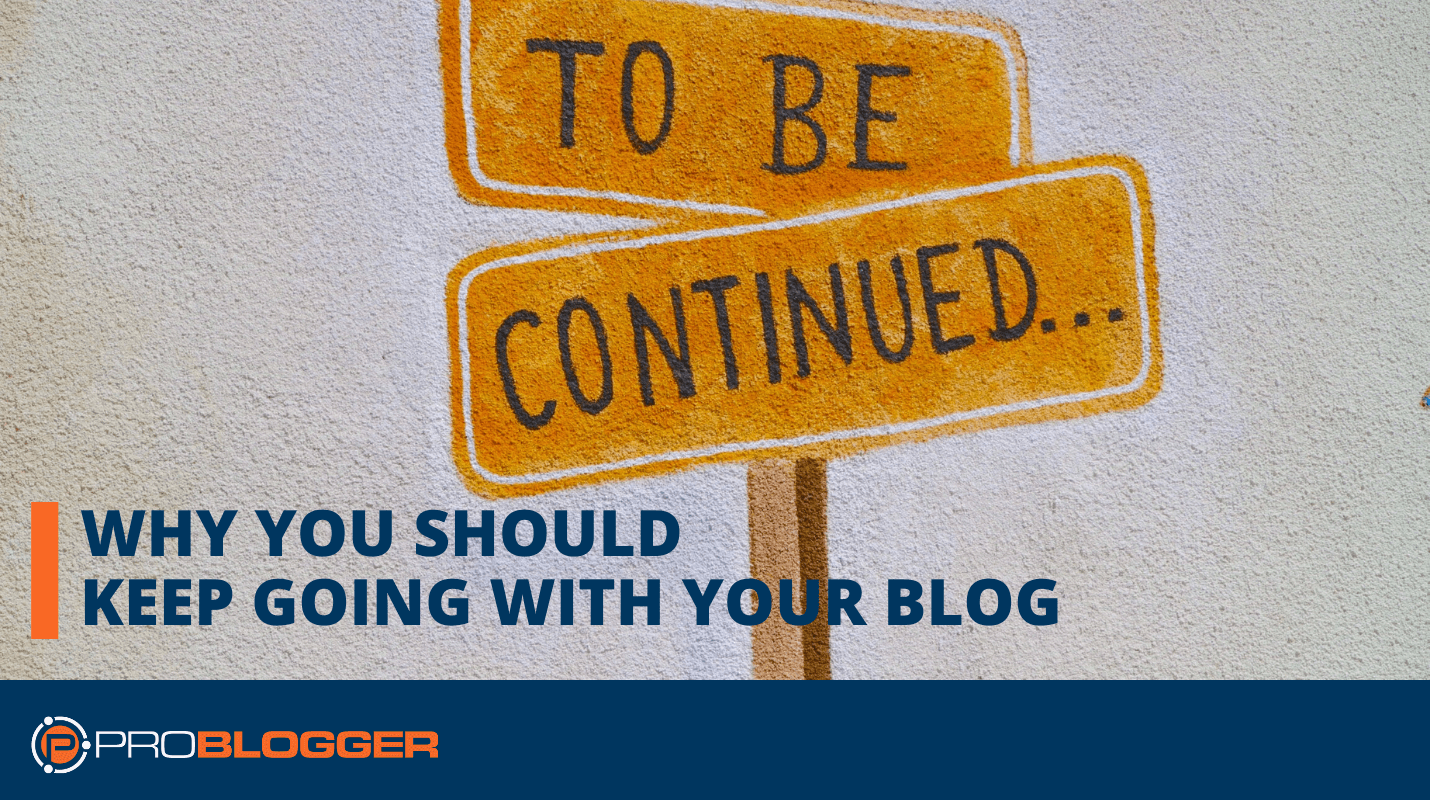 This post is based on episode 89 of the ProBlogger podcast.

Last week I talked about ‘starting’, and why it’s the most important thing you’ll ever do as an entrepreneur.

This week I’m going to talk about the second most important thing you’ll ever do as an entrepreneur. And like so many of life’s lessons, there’s a story that captures the idea perfectly.

But this story isn’t mine. It’s actually one I came across while researching a project in high school. But it’s one that really resonated with me, and I hope you’ll find it just as useful.

The year was 1851, and the Cavanagh brothers stood by a bend in a creek that had optimistically been named Golden Point by gold prospectors in days gone by.

The two brothers had been digging in their claim for days, along with around 600 other miners. Numerous miners had already found gold at this particular bend and made good (but not spectacular) money from their finds, which is why so many miners were there.

Most of that gold had been found in the top meter or so of sandy ground, which was relatively easy to get through. But below that was a hard layer of clay, and getting through that was backbreaking work.

The miners were also hearing rumours of richer pickings further up the creek. And so it wasn’t long before the entire area around the brothers’ claim was littered with abandoned holes, all about a meter deep.

But the two brothers stayed. They believed there was still gold to be found, and began the arduous task of digging into the hard clay that had sent everyone else packing.

They moved to an abandoned claim from another miner and began digging. Inch by inch they chipped away at the clay, only to find more of it. They went to bed that night with nothing but sore backs.

The next day they started digging again. Again they chipped away at the layer of clay inch by inch, only to find more of it underneath.

As sunset approached, the brothers finally broke through the last of the clay. The hole was now around two meters deep, and at the bottom they discovered an old creek bed that was centuries old. More importantly, they found pockets of gold that had been washed down from the mountains for hundreds of years.

The brothers worked feverishly through the night until their lamps gave out.

The next day they woke early and assessed their work. In the light of day, the full reality of what they’d uncovered began to sink in. There was gold below that clay—and lots of it.

In that day alone the Cavanagh brothers found 27 kilograms worth more than £3,500, which was more than enough to set them up for life.

Word of their success spread quickly. A month later there were 10,000 miners working in that area around Golden Point, who I imagine started digging a lot deeper than they normally would.

And the wider Ballarat area (just a few hours from where I live here in Australia) became the richest gold field in the world.

As I said, I learned about the Cavanagh brothers back in high school. And while I don’t even know their first names, I often think about them, and how they kept going when so many others had given up.

I also think about how their persistence not only led them to their fortune, but also encouraged others to try something new (i.e. dig deeper). People who saw them digging and probably thought they were crazy before were now doing the same.

Which is why persevering is the second most important thing you’ll do as an entrepreneur. Sometimes you need to do a lot of digging before you find success. But when things get tough, and people start abandoning their ‘claim’ and moving on to the next big thing, it can be tempting to do the same.

There have been times when I’ve felt a bit like the Cavanagh brothers. (As a blogger, I mean. I don’t like physical labor, and would never grab a pick and start digging into clay.) I’ve seen plenty of bloggers come and go over the years. Like me, they saw the opportunity to build something significant. But at soon as things got tough, they gave up and abandoned their blogs.

And there have been times when I’ve thought about giving up too.

I’ve seen a lot of bloggers abandon their work after deciding they’d be more successful on other platforms. Back when I started blogging, some of them were already talking about abandoning their blogs and moving to MySpace. And since then I’ve heard about many bloggers who abandoned their blogs to get on to Twitter, Tumblr, Facebook or Google Plus.

The blogosphere is littered with abandoned blogs. And I sometimes wonder what might have happened if they’d kept digging through the clay rather than abandoning their claim. Persistence doesn’t always lead to success, but it’s a big part of successful blogging (and success in pretty much every field).

However, in some situations you may be better off abandoning what you’re doing and moving on rather than flogging the proverbial dead horse.

Yes, the story of the Cavanagh brothers is a great example of how persistence can pay off. But I’m sure there are other stories about miners who spent far too much time digging in the same spot for little if any reward.

That can happen with blogging as well. And in those cases, quitting might actually be the best option.

Which is what I’ll be talking about in next week’s blog post.