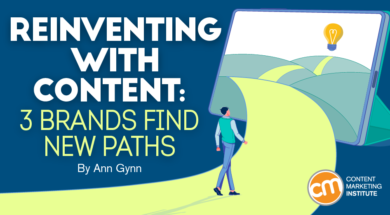 What do you do when your usual business model can’t work?

One found a viral hit when it promoted its new business service model.

One engaged formerly in-person fans in a spirited online event – and received requests to do more.

One may add a media brand to its mix as it forges a new (digital) runway.

Curbside service became the business model for most libraries due to the pandemic, including for the Barbara Bush Branch Library in the Harris County Public Library system in Texas. While patrons used the service, the library was nowhere near as busy as it had been.

“We were trying to think of different ways to get the word out. I jokingly said we should have a commercial,” says John Schaffer, content production specialist and former adult program specialist. “Of course, that’s absurd because there is no budget for TV advertising,”

But John and his colleagues didn’t abandon the idea. As they pondered what a commercial for a library would look like, they concluded it would have a low-budget, local feel.

John made his debut as Curbside Larry in a 74-second video, in which he loudly let viewers know about all the options available ­– from genres (watch for his pose in the brief mention of romance) to formats (yep, they have books and DVDs too.) Yep, he’s got the bargains. Everything he shows can be yours for a low, low price in three payments of zero, zero, and zero. And if you don’t have a computer to order, that’s OK because Curbside Larry puts the phone number across the screen.

“At the Barbara Bush Branch Library, we all felt like it was a good idea, and we had hopes that it would get seen by the patrons who subscribe to our social media platforms,” John says. “We didn’t have any idea it was going to be as big as it was.”

And those are just the in-house stats. The video was mentioned on BuzzFeed, CBS This Morning, and it even led to a segment on Good Morning America. Though just introduced, the character made Texas Monthly’s Most Iconic Local TV & Billboard Legends in Texas list.

“The response has been amazing, from our local patrons, to libraries on the other side of the globe. I think it is just a reminder as to how important libraries are for everyone,” John says.

Nancy Hu, branch and communications manager for Harris County Public Library system, collaborates with John to produce and release the content, though he maintains creative control of Curbside Larry.

“We’re both fortunate to work at a library system that really allows for creativity and freedom to develop programs and content for our libraries,” she says.

And Curbside Larry is sticking around. Nancy says the library is producing more videos with the character and is planning to record them in other languages to reach even more patrons.

The in-house team wrote a blog post about the Curbside Larry phenomena and included an interview with John conducted by youth services Assistant Manager Jennifer Bacall, which is also posted to its YouTube channel:

But just because they couldn’t compete on the field didn’t mean the games couldn’t go on. “Innovation truly comes out of times like these,” says Revolver PR owner Amanda Samaan, who counts the Boras Baseball Classic among her clients.

Within 24 hours of canceling the in-person games, the tournament took a content twist. The 64-game bracket now would be “played” on the fields of Twitter and Instagram, with fans voting to determine the winners.

“We wanted to do something fun to help those who had seasons canceled,” Amanda says. “We expected a couple hundred votes per game but ended up getting thousands for each game.”

Each “voting” game was hosted at its original playing time and ended two hours later (the average length of a high school baseball game).

On Twitter, a simple poll identified the two competing teams and asked who would win. On Instagram, using the Mojo app’s voting template, fans were asked “who would win this match up” with the two team names as the answer options.

During game time, “score” updates were broadcast on Twitter. But the conversation wasn’t limited to the scoreboard. The Boras Baseball Classic crew created a wider conversation on those social channels, posting archival photos and video interviews with the teams as if they were happening live. Everybody could join the conversation calling “plays” and commentating as if the games were really happening.

“It really brought the games to life and made them more exciting. Everyone from the players themselves to the media and coaches were all in on it,” Amanda says.

Virtual champions were crowned with trophies, and championship T-shirts (originally produced for the in-person tournaments) were sent to the winning high schools. “Coaches were texting me,” Amanda says. “They were anxious (during the ‘games’) and upset when they lost.”

Sponsors like Gatorade, Wilson, and Melissa’s Produce stuck with the online tournament. “In our pretend play-by-play calls, we give a shout out to our sponsors,” Amanda says.

Media coverage of the virtual games happened, too, as nothing else was happening in the sports world. “We didn’t lose the media that we would have lost if we didn’t have any tournaments,” Amanda says.

“Our competitors just canceled and didn’t do anything to replace it. They went dark,” Amanda says. “We had a huge advantage in being able to engage the fan base and get their mind off of the uncertainty and stay-at-home orders.”

In February, Sharpe Suiting took to the New York Fashion Week runway to show its capsule collection to the world. But with fashion weeks around the world canceled for 2020 and possibly 2021, Sharpe Suiting eagerly reinvented its usual brand awareness marketing.

Already an innovator, the company is registered as a public benefit corporation and “has been helping brave individuals showcase exactly who they are” since 2013. It even trademarked its design formula “andropometrics”™ – designing a look that fits the individual and matches their unique style and identity.

Now, Sharpe Suiting is readying a “cassette capsule” to debut in the first quarter of 2021 on Instagram and YouTube.

It won’t be a video version of a traditional runway fashion show. “It’s given us opportunity to be creative and maybe even shift forward on social platforms,” says Leon Elias Wu, founder and CEO of Sharpe.

Instead, Leon says, Sharpe is teaming up with music producer Hubie Wang (who has worked with platinum artists including Jason Mraz and Travis Mills) and video producer James DeAngelis (who has been featured in Variety and won a YouTube Streamy Award) to create an engaging and revolutionary content marketing/visual campaign.

The new cassette capsule is made up of four music videos, each featuring a remake of a popular ’80s song by an up-and-coming artist. And each will include a small nod to Sharpe’s clothing or accessories. For example, one video will include a Sharpe pocket watch, but the logo won’t be visible.

“It’s about the artists and the songs,” Leon says. “The point is not to have a commercial feel to it or any sort of advertisement feel. It’s to show a story.”

“This takes (a fashion show) to a whole new level,” Leon says. “It puts us in a different but advantageous position. We can reach tons of people, not just 2,000 crowded into a venue, hoping that some media rep in the front row writes up the show.

“Going social with this campaign enables us to reach and appeal to the masses in a more meaningful way,” Leon says.

But the videos aren’t a cheaper alternative. Leon estimates Sharpe will spend at least one-third more than it does for a traditional show, in part because of increased public relations outreach and the need to secure the musical rights.

Though Sharpe Suiting isn’t planning to abandon the runway altogether, the company recognizes it no longer needs to pick only one avenue. And it may no longer need to just pick one business.

“We’re not just reaching out to those who have an interest in fashion. We’re reaching other audiences, gaining that crowd and great following,” Leon says. “We can be not just a fashion company but also an entertainment and media company.”