How Leaders Can Help Prevent Emotional Exhaustion at Work 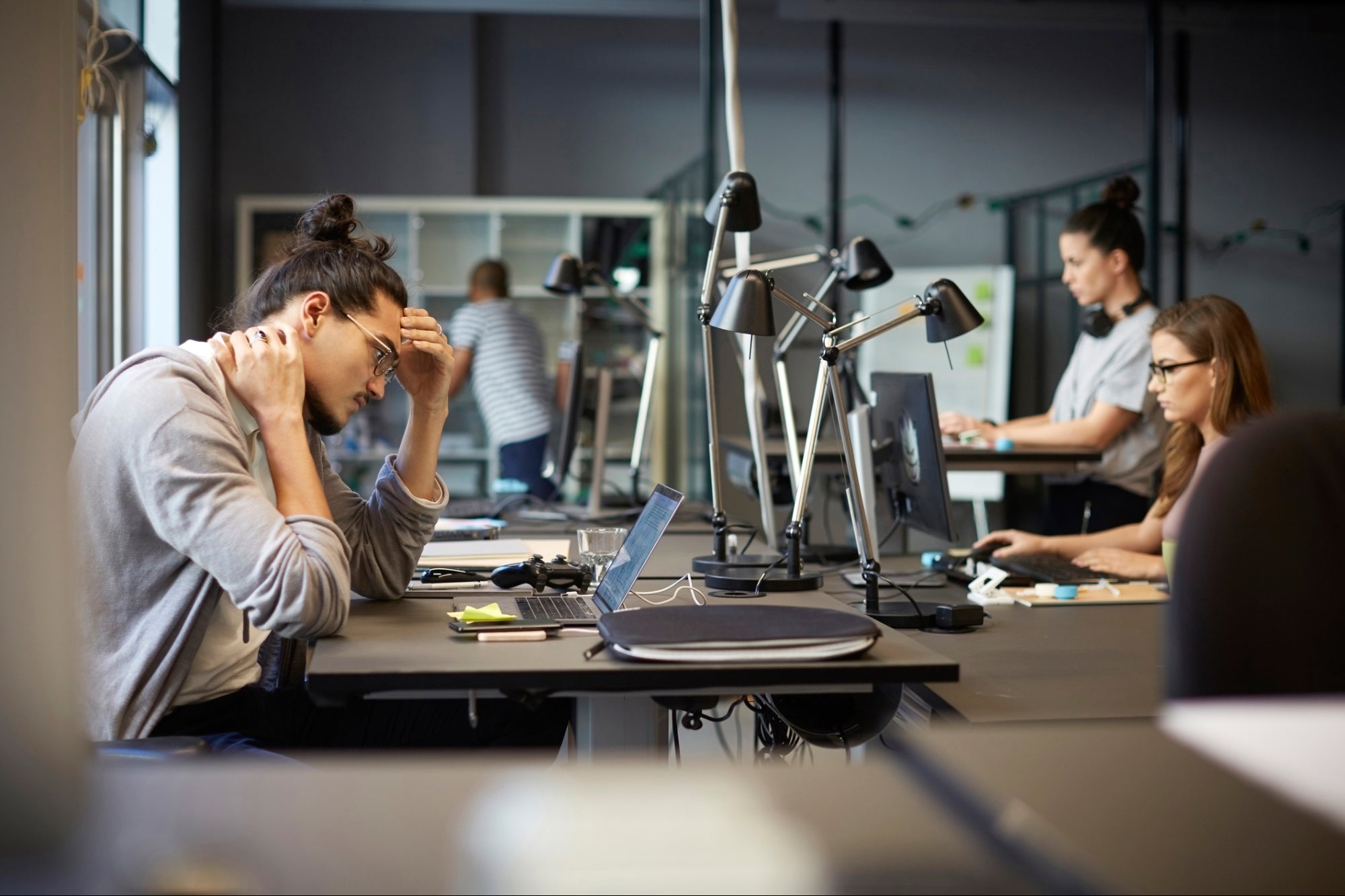 Our natural response to fear — our fight-or-flight response — is widely understood. On perceiving a threat, the hypothalamus in our brains sends the message to our adrenal and pituitary glands to release hormones that prepare the body for action. When the perceived threat is gone, the brain stops triggering the release of these hormones, and homeostasis begins, with our bodies gradually returning to their normal states. Easy-peasy.

Things start to break down, however, when our brains start continuously getting signals that there is a threat. When that happens, the natural fear response basically short-circuits, with the body stuck in a continuous cycle of releasing hormones then trying to normalize. This creates chronic stress, which drains the body’s adaptive energy and leads to emotional exhaustion. Hans Selye, often referred to as the “father of stress research,” named it General Adaptation Syndrome, which progresses from an initial Alarm Stage to Resistance and ultimately to Emotional Exhaustion.

The conditions for emotional exhaustion have been in play for your employees — and everyone else for that matter — for months now. Our brains are inundated with relentless non-specific fear stimuli stemming from the Covid-19 pandemic. From the moment we open our eyes we are braced by reminders that we aren’t in Kansas anymore. And just in case the myriad of disruptions in every aspect of our lives weren’t enough, mainstream media and social media give us daily, hourly, minute-by-minute reports on infection rates, deaths and the omnipresent risks we all face. These feed directly into Selye’s Resistance stage and are continuously depleting our adaptive energy.

You may not be seeing the signs in your team yet, but it’s unlikely that they aren’t already dealing with some degree of emotional exhaustion. It is equally unlikely that the fear stimuli, either health or financial, will be ending anytime soon, meaning that things are only going to get progressively worse in the upcoming months.

The negative implications to your workplace can’t be overstated. Mary D. Moller, Associate Professor, Pacific Lutheran University School of Nursing, and Director of Psychiatric Services for the Northwest Center for Integrated Health, has spoken extensively about the negative impact of emotional exhaustionon people’s ability to learn and to adapt. Other experts have pointed to emotionally exhausted employees as caring less about customers and feeling less personal accomplishment at work -- and a number of other serious physical and emotional issues.

Oh, and they’re also more likely to be thinking of quitting.

Mitigating the impact of this emotional exhaustion in the workplace has become a priority. Ignoring it isn’t a viable option, and winging it could potentially make matters worse. Unfortunately, the practices considered the most effective up until just a few months ago simply aren’t good enough right now. They were designed to improve engagement, collaboration and productivity, not to combat emotional exhaustion.

Traditional change management approaches are equally unlikely to work. They are founded on having a clear vision of the end result and clearly defined, incremental, timelines to get there. Those things are, at the moment, elusive for most organizations. Even if they weren’t, workplace changes represent only a small part of the ongoing negative stimuli fueling employees’ emotional exhaustion. Addressing them in isolation is not likely to have a significant impact.

One thing you can do for your employees is to mitigate their emotional exhaustion by removing negative stimuli from the workplace environment. Stop the stimuli, stop the brains from short-circuiting and give brains and bodies an opportunity to begin recovery. You can make the workplace, in essence, a welcome safe zone.

I have seen the impact of this firsthand in the first business I owned — a small chain of toy stores. The mandate in them was to create a fun environment for kids so that they would want to return. It worked, but I was always struck by how many employees actually looked forward to coming to work too.

Most of them were either university students or parents of young children. For them, it turned out, the idea of playing and being around happy kids was a welcome respite from the pressures at home and school. “You don’t understand,” one employee once told me, “This is my happy place. Getting paid is just a bonus!”

The opportunity for employees to recover adaptive energy in a safe zone helps them develop adaptive resilience — the mental strength and ability to adapt and cope with frequently changing or uncertain environments. It’s a temporary respite, of course. The stressors will still be present in all other aspects of your employee’s lives, causing the cycle to start anew and again drain adaptive energy. But this only increases the value of the safe zone you’ve created for them.

Creating a safe zone for your team is the necessary first step in what I refer to as Adaptive Resilience Leadership. The foundation of this safe zone is, not surprisingly, you.

Your moods and your emotional intelligence play a critical role in the emotional balance of your team. In their research into Primal Leadership, Goleman, Boyatzis and McKee highlight the profound impact a leader’s upbeat mood can have on the workplace. That needs to be your starting point. After that, there are four things you can focus on:

While safety and vigilance need to be at the forefront of anyone in a workplace, it does not have to come in uninterrupted streams. Try to avoid conversations about the news while in meetings and discussions about work. Encourage employees to take social media breaks during working hours. These are, at the moment, full of negative stimuli. There is a difference between staying informed and being overwhelmed.

Mitigating the pervasive climate of uncertainty is another goal for your safe zone. The absence of certainty is a powerful stressor that impacts people both mentally and physically. While it’s true that you may not have certainty in terms of where your business and workplace will be in the months to come, you can create a degree of certainty in terms of what each day will look like for your employees. This starts with establishing predictable routines at work.

Routines are effective ways to bring order from chaos, and as a leader, it’s important that you establish them for your teams. One effective approach, for example, is to implement a highly-structured 6-minute huddle with your team first thing every morning. If you don’t stray from the 6-minute restriction, don’t vary from the format and keep the content meaningful, this practice begins everyone’s workday with that little bit of order — signaling that the safe zone has begun.

These huddles are particularly valuable if you have found yourself with a remote workforce, where employees may be struggling to separate home life from work life. They are also a powerful vehicle for reminding your team that, despite everything, their purpose remains unchanged. Purpose, as Dan Pink highlights in his autonomy-mastery-purpose model, is a critical motivator in ongoing engagement.

Communication with your employees is, of course, critical. But it’s not just the volume, it’s the nature and quality of communication that is important. A 2015 study found that job-relevant communication and training, as well as positive relationship communication, were strong counters to emotional exhaustion in social workers.

In addition to the morning huddle with your team, have daily check-ins with each employee — particularly with those working remotely. Keep them brief, positive and relevant to their work so that they aren’t perceived as annoyances. Consider varying the check-ins occasionally to include two employees at a time. It’s a great opportunity to help your employees feel positively connected with each other, and gives them a sense of transparency and being part of something larger.

Johannes Siegrist, Senior Professor of Work Stress Research at Duesseldorf University, identified high-effort/low-reward work conditions as being a significant cause of stress and negative health in the workplace. Her research shows that stress increases when people perceive that the physical and mental effort being asked of them is greater than the reward they are receiving.

Your employees are, at the moment, being asked to cope with significant ongoing changes, learning curves and emotional situations. This is increasing their effort markedly, and you need to make sure that the effort is balanced out. It’s not necessarily about money, although that is one of the three reward types Siegrist identifies. The other two are Esteem and Status Control, and they are equally, if not more, important.

Esteem is created when leaders demonstrate appreciation and recognition for employees’ efforts. This means making sure that each employee has no doubt about how much you understand, appreciate and value the efforts they are putting in. Status Control is closely related to the autonomy component of Pink’s model, and is created when employees feel a sense of control over their work, and that their input is valued. This means listening to their thoughts and ideas, and giving them an opportunity to contribute.

It’s a fair guess that your employees are already short-circuiting and in some stage of emotional exhaustion. Given the current global environment, how could they not be?

Sadly, the relentless tsunami of negative stimuli is not going to be ending soon. The likelihood is that, even when the threat to health begins to abate, the economic fallout will still be in full bloom. If left unattended, the ongoing negative impact on your employees’ mental health and the resulting health of your workplace is only going to deteriorate. There has never been a time when strong, strategic leadership was more important.